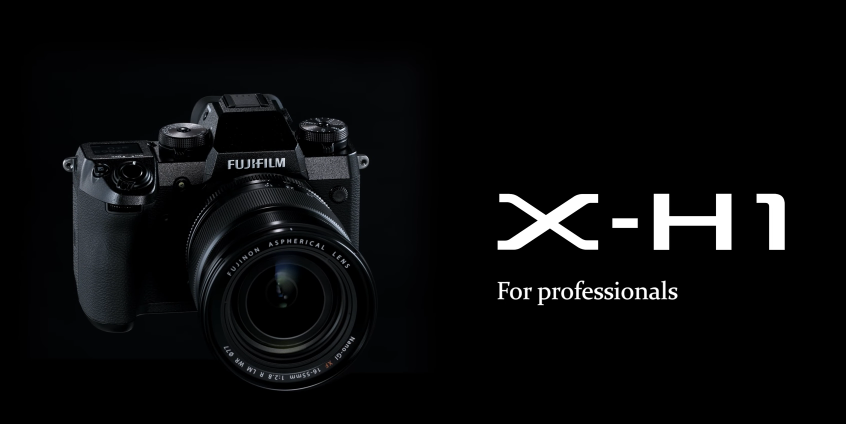 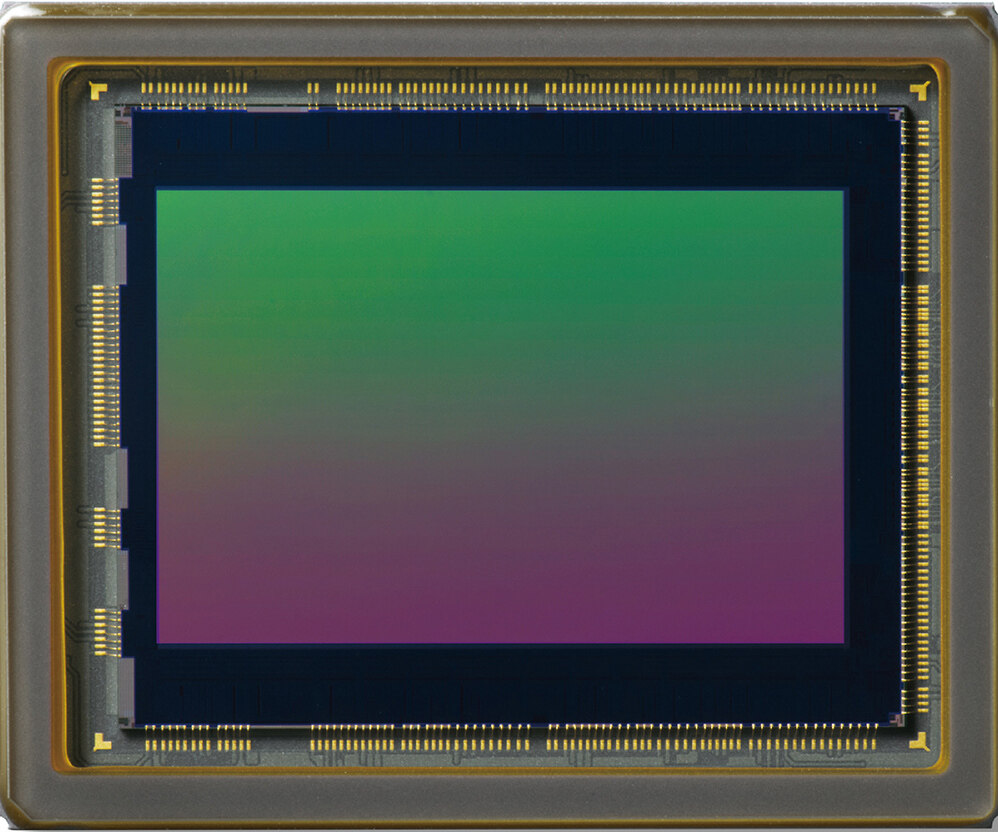 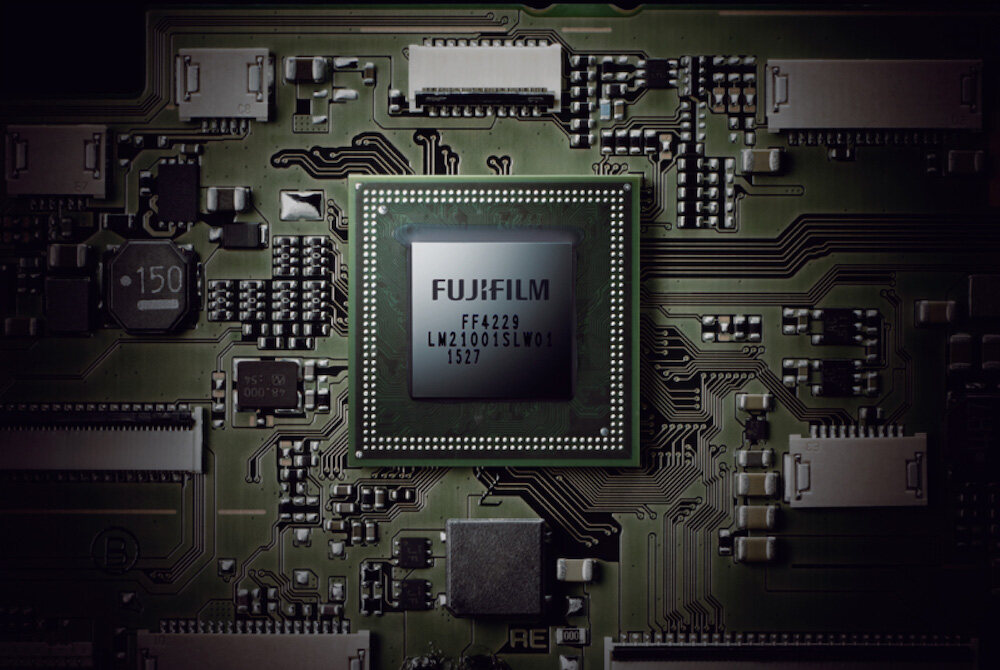 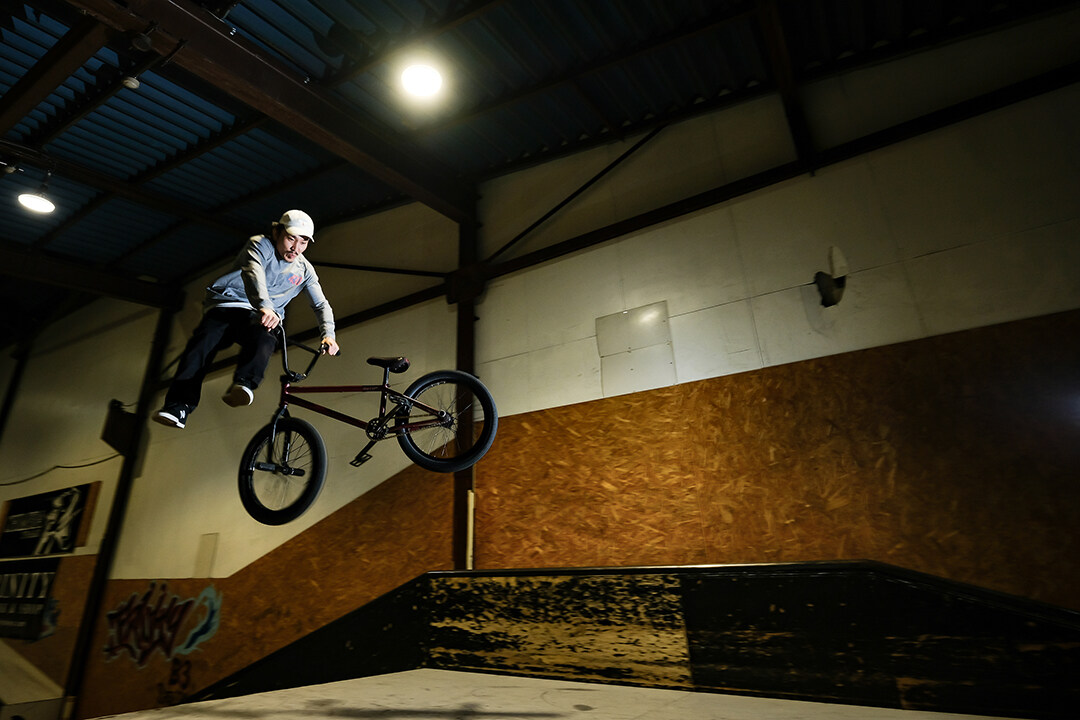 *1 X-Trans is a trademark or registered trademark of FUJIFILM Corporation.

*2 When using the Boost Mode with a power booster grip

*3 When using the electronic shutter: Up to 11 fps when using the mechanical shutter (when the Boost Mode with a power booster grip is enabled)

The FUJIFILM X-H1 features the 24.3MP APS-C sensor “X-Trans CMOS III”, which delivers images with enriched depth. The use of aperiodic color filter array minimizes moiré and false colors even without an optical low-pass filter. When combined with XF lenses, specifically designed for this series of cameras, the sensor achieves outstanding descriptive performance.

The “X-Processor Pro” is a processing engine that draws out the maximum capability of the “X-Trans CMOS III” high-performance sensor. Its use of large built-in memory and advanced processing power boost the camera’s speed and precision performance in interval shooting, shutter release time lag, AF, continuous shooting, live view display, etc. The processor also supports the Boost Mode for the vertical power booster grip, VPB-XH1, enhancing the camera’s performance to another level

The FUJIFILM X-H1 boasts autofocus performance with enhanced capability to track a moving subject. With 91 focus points (up to 325 points), the camera has a phase detection AF area that covers 50% (side to side) and 75% (top to bottom) of the frame to achieve fast and accurate autofocus. The phase detection’s AF range has been expanded by 1.5 stops from the previous 0.5EV to -1EV, while the minimum aperture requirement is also improved from F8 to F11. Enhanced AF-C performance during zooming means the camera can handle sports with erratic subject movements, and capture a subject with fine textures such as a distant animal, with an advanced level of precision.

The FUJIFILM X-H1 offers three user-adjustable parameters for determining focusing characteristics to make it easier to accurately track a moving subject in the AF-C Mode. There are presets to suit different types of scenes, or you can determine your own custom setting. 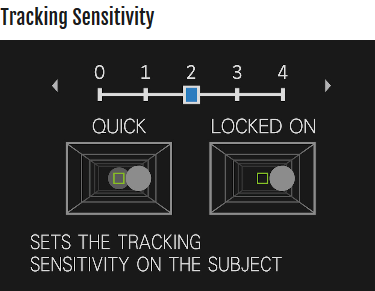 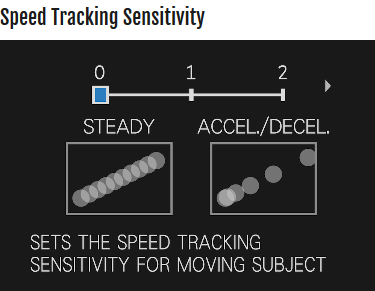 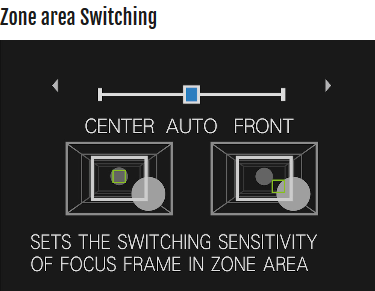 The rear 3.0-inch 1.04-million-dot LCD monitor can be tilted by 90 degrees upwards, 45 degrees downwards and 60 degrees to the right for easy high-angle / low-angle / vertical low-angle shooting. The use of the capacitive touch panel facilitates intuitive touch-screen operations for focus point selection, etc.

The FUJIFILM X-H1 has a large, class-leading 3.69-million-dot high-resolution electronic viewfinder with the magnification ratio of 0.75x, boasting a display time lag of just 0.005 sec, and a refresh rate of up to 100fps. It is approximately 1.6 times brighter than previous models, enabling subject capture and focus adjustment with greater precision. The eye sensor, for automatically switching between rear monitor display and viewfinder display, responds around 2 times faster than previous models for enhanced usability.

The top plate of the FUJIFILM X-H1’s shutter unit is equipped with suspension for absorbing delicate shock generated by the operation of the mechanical shutter. This minimizes camera shake risks to maximize the effect of image stabilization. The mechanism reduces shutter noise to the lowest level in the history of X Series, making the camera a perfect choice when silent operation is desired, e.g. when photographing wildlife, stage performances or wedding ceremonies. 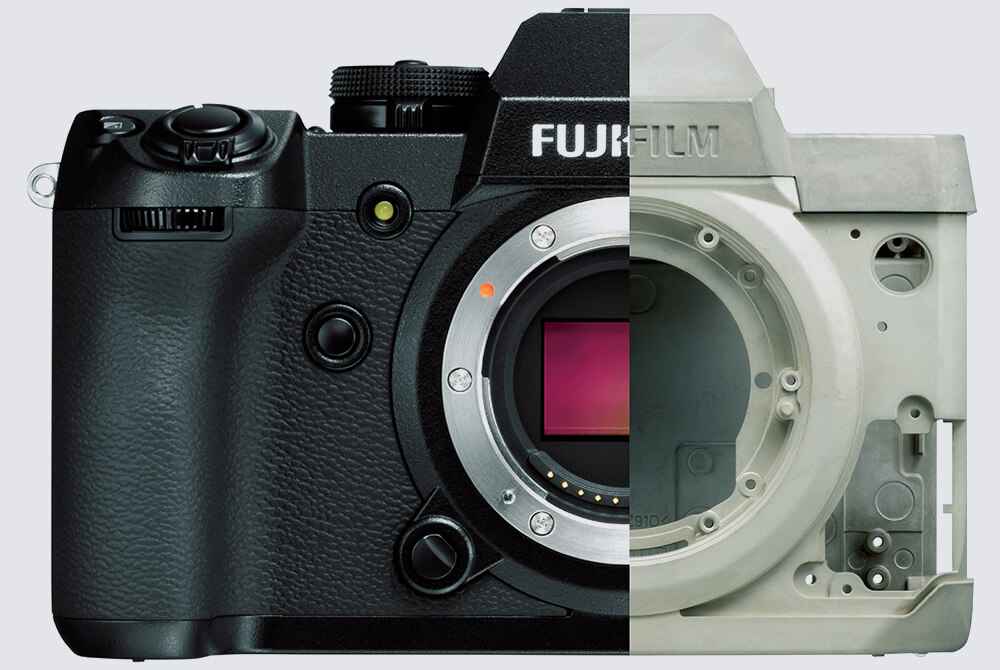 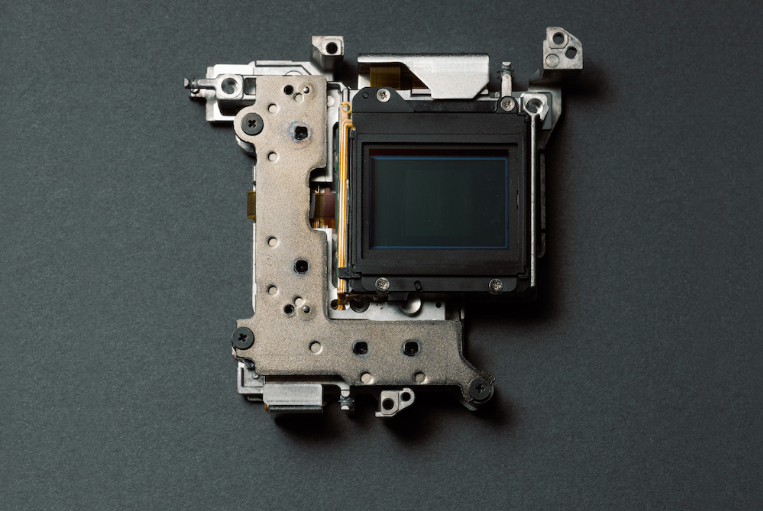 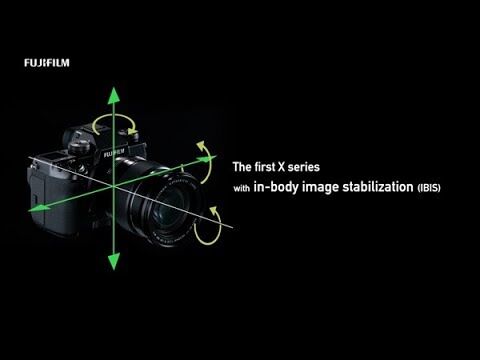 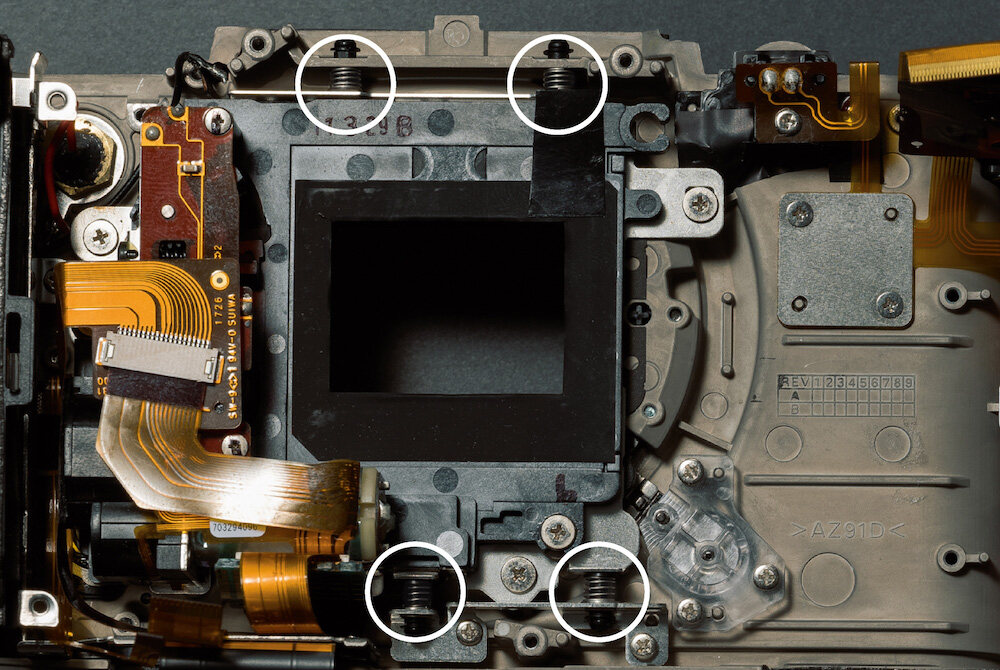 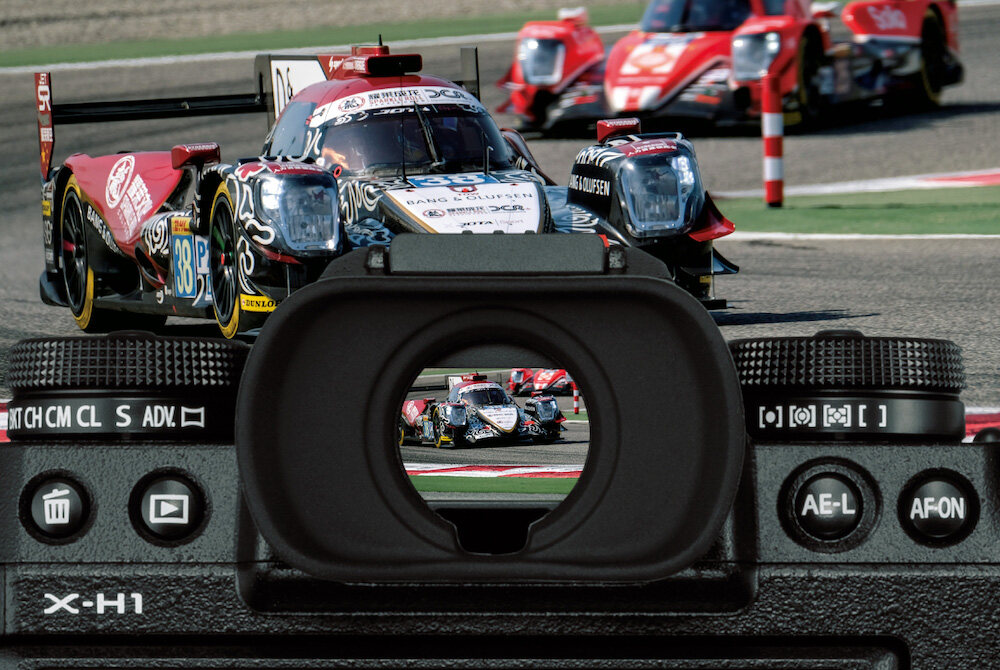 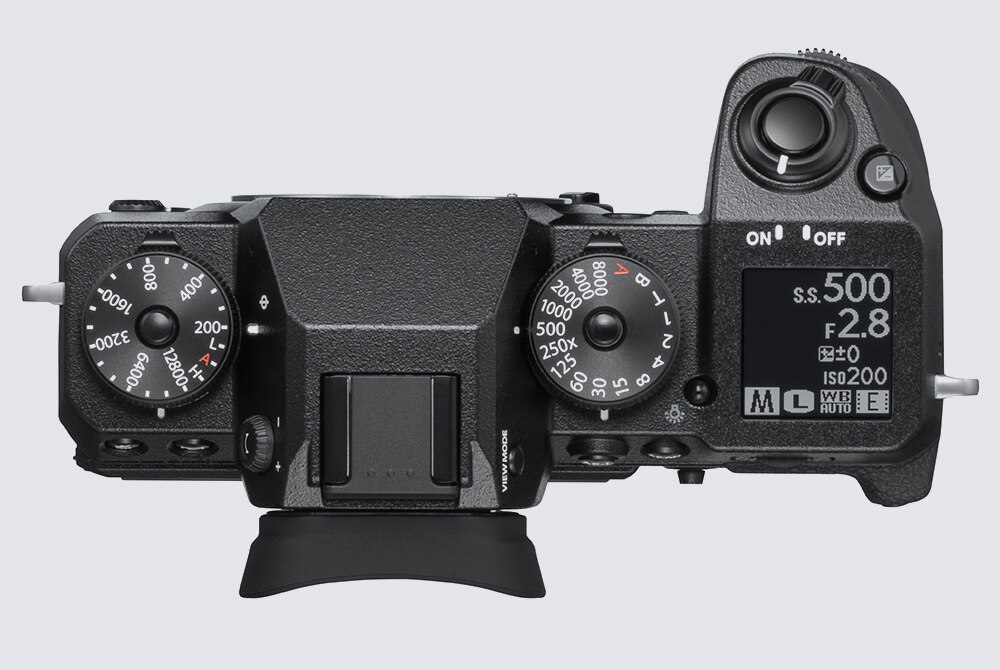 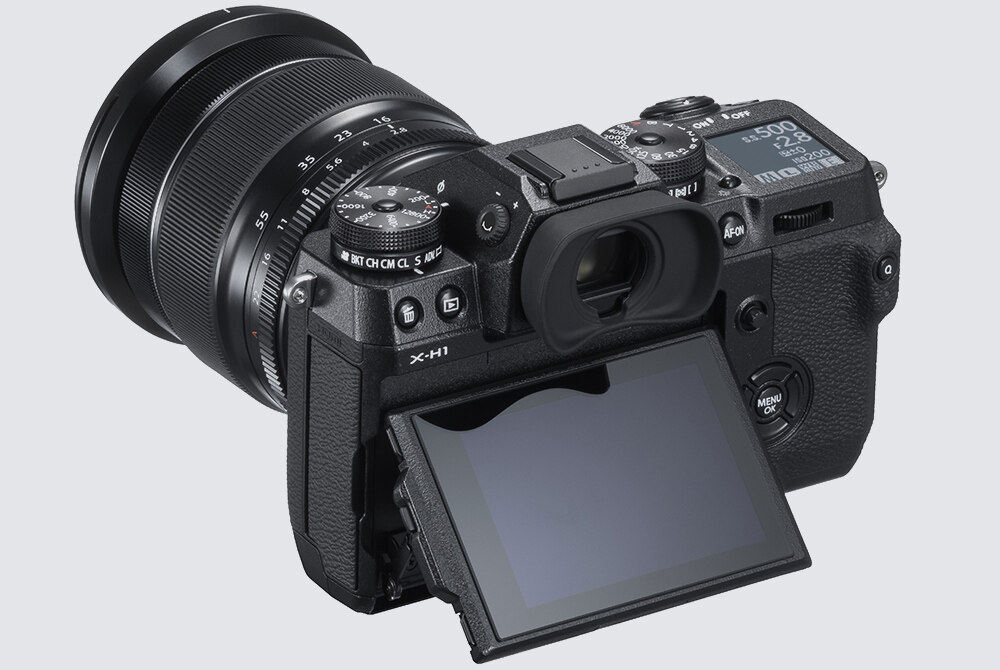 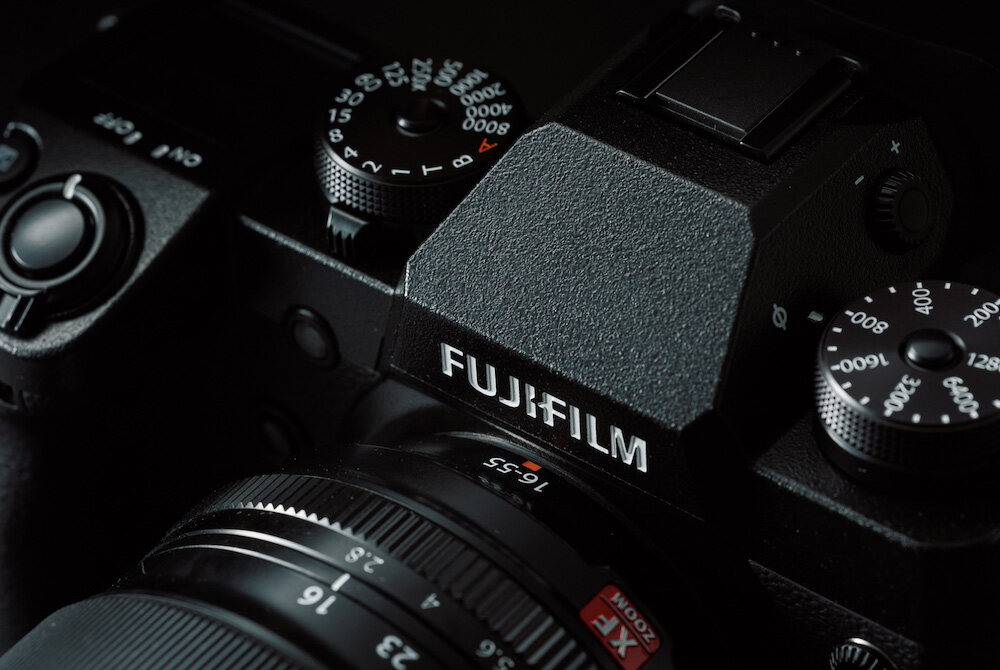 The FUJIFILM X-H1’s body is made of magnesium alloy, 25% thicker than previous models. The lens mount’s structure has been revised to achieve a compact and lightweight design that is also of high precision and more resistant to shock or damage than other models in the X Series. It is also resistant to dust and moisture, capable of working at temperatures as low as -10°C. The grain size of the exterior coating has been improved to achieve scratch resistance equivalent to 8H surface hardness.

For the first time in the X Series, the FUJIFILM X-H1 has an image stabilization mechanism built in. A three-axis accelerometer, a three-axis gyro sensor and a dedicated dual processor work together to carry out processing and correction approximately 10,000 times every second to achieve image stabilization performance with advanced speed and precision. The correction is based on five axes (up and down / right and left pitch, yaw angle and optical axis rotation) to achieve more than five-stop (up to the equivalent of 5.5 stops*1 ) image stabilization when the camera is fitted with any FUJINON lens that does not feature the optical image stabilization functionality. This complements FUJIFILM X-H1’s performance in low-light conditions or when shooting active scenes.

With Film Simulations, you can apply colors and tones that match your artistic intentions to your pictures, as if choosing different special effect photographic films. The FUJIFILM X-H1 comes with sixteen Film Simulation modes, which Fujifilm has uniquely created based on the color-presentation philosophy and know-how the company has developed through more than 80 years of photo film production. 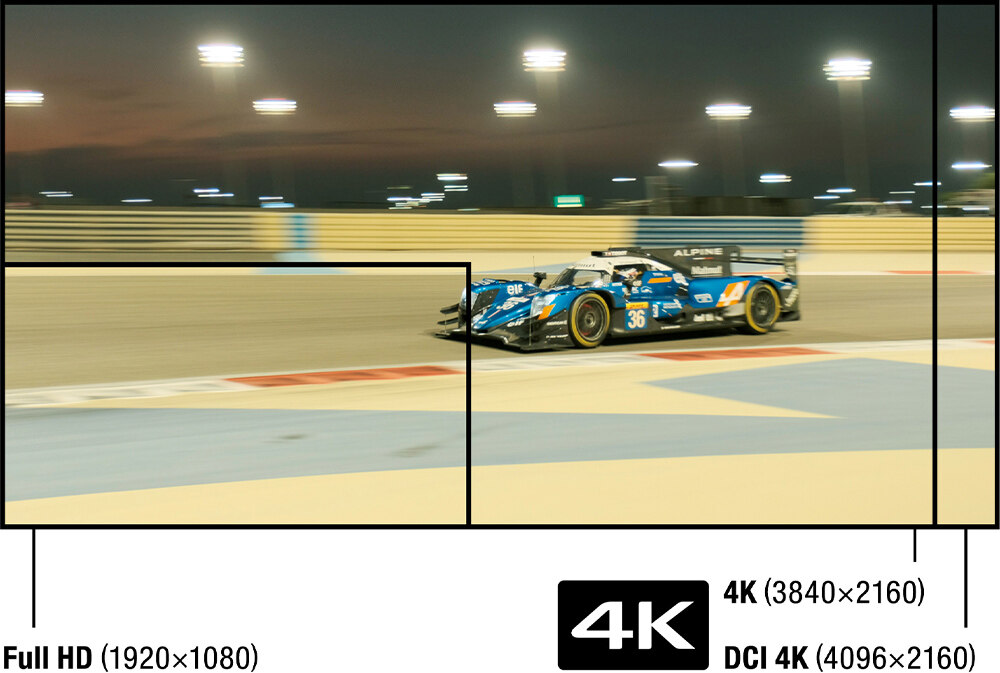 The X-H1 supports the digital cinema aspect ratio (17:9), and records high-quality video at a high bit rate of 200 Mbps. You can use the highest ISO 25600, a low shutter speed of 1/4 sec, and even Film Simulation modes in video, enabling diverse video expressions. A premium sound microphone (24bit / 48KHz) is built in, which means you don’t need extra equipment to record sound in high-resolution quality.

The dynamic range “F-Log” log-gamma option*1 is available for recording and uncompressed output to external equipment. It supports “color grading,” which refers to post-shooting processing of colors and tones for artistic videography. The long-awaited addition of the Film Simulation lookup table (for ETERNA) has increased freedom in post-processing.

The Silent Video Operation function allows you to control settings such as aperture, shutter speed, ISO sensitivity and white balance with silent touch-panel operations on the rear monitor, preventing the camera from picking up operation noise from buttons and dials during video recording.

FUJINON Cine Lenses are used to shoot movies, commercials, and television dramas all over the world. These lenses have world-class performance and quality ingrained in their DNA. They are now available in X Mount version with the new MKX Series. MKX lenses have excellent optical performance, lightweight and compactness and are available in both standard zoom 18-55mm and telephoto zoom 50-135mm focal lengths. Both lenses feature a consistent T2.9 speed for shallow depth of field and beautiful bokeh effects.